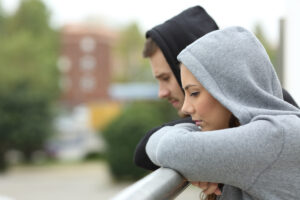 When pursuing the adoption process, prospective moms and dads usually have a lot of questions.  However, no topic typically causes more anxiety than that of the birth father.  The birth father has feelings for the child and deserves respect and consideration.

Just about every adoptive family has heard horror stories about a birth father that appeared out of the woodwork years later and contested the adoption, claiming that his rights weren’t properly considered. It’s a big fear – and it’s a very real one.

When you work with a reputable adoption agency, like Open Arms Adoption Agency, adoption counselors will help you maneuver the process and make sure all your t’s are crossed and your i’s dotted so no issues threaten your family’s future.

With that said, birth fathers do have certain rights and you need to be aware of these during the adoption process. Unfortunately, not all birth mothers are open to disclosing information about the father. In some cases, they truly may not know. In other situations, such as rape, abuse or martial affair, the birth mother may be ashamed or even fearful about revealing the identity of the baby’s father.

The adoption agency will help determine if the birth father’s rights will create an issue, but you need to know:

While the consent requirements of the birth father vary from state to state, in general, they have the same rights as the birth mother. If she doesn’t want to raise the child, the birth father has that option instead of agreeing to adoption.

When issues with the birth father arise, it is often because he wasn’t informed of the pregnancy or didn’t receive notification of the impending adoption. If he finds out about the child, he may contest the adoption later.

For this reason, it is best if the birth father can be located and notified about the intent to adopt, even if you are afraid that he might initially object. If the father didn’t know about the pregnancy, he may want to temporarily pause the adoption process so he can sort out what he wants to do about the pregnancy. Remember, just because he first says no doesn’t mean his answer won't change.

Throughout all of this, it is important to consider that while certain media cases have grabbed headlines, in general, birth fathers rarely cause issues with adoptions. Many do consent to an adoption or don’t respond and their parental rights are terminated without incident. Just be educated and select a reputable adoption agency you can trust has the knowledge to help you navigate the adoption process.

Connect with us today through the chat button, email info@openarmsadoptionagency.com or call (206) 492-4196